DatumMate – Extremely Accurate Coordinate System and Datum transformations for South Africa for AutoCAD® drawings. The purpose of the software is to provide an intuitive graphical approach to Datum transformations for South Africa. On the 1st January 1999, the South African co-ordinate system changed from being based on the Clarke 1880 ellipsoid to being based on the WGS84 ellipsoid. This means that all co-ordinate points in South Africa now have new values. DatumMate enables you to quickly and accurately convert existing AutoCAD drawings from the old Cape Datum to the new Hartebeesthoek94 Datum and vice-versa.

Prior to 1st January 1999, the co-ordinate reference system for South Africa was the Cape Datum. This datum was based on the Clarke 1880 ellipsoid and had it’s origin point at Buffelsfontein near Port Elizabeth. The Cape datum was based on the work of Sir Thomas Maclear and Sir David Gill between 1833 and 1907. The initial network was extended to cover the whole of South Africa, and now comprises approximately 29000 trigonometrical beacons and approximately 20000 town survey marks.

With the advent of modern positioning techniques such as the Global Positioning System (GPS), the flaws and distortions in the national control survey network have become apparent. In addition, most national geodetic networks do not have the centre of their reference ellipsoids co-incident with the centre of the Earth, thus making them useful only to their area of application. The upgrading, recomputation and repositioning of the South African co-ordinate system has been driven by advancement of modern positioning technologies.

As from 1st January 1999, the South African co-ordinate system is based on the World Geodetic System 1984 ellipsoid (commonly known as WGS84), with the ITRF91 (epoch 1994.0) co-ordinates of the Hartebeesthoek Radio Astronomy Telescope used as the origin of the system. The new system is called the Hartebeestehoek94 Datum. At the moment heights will remain referenced to the mean sea level, as determined in Cape Town and verified with tide gauges at Port Elizabeth, East London and Durban.

Unlike some datum transformation software, DatumMate does not require any DXF files to operate; it works directly with your AutoCAD drawing, running inside AutoCAD. The result is much faster datum transformations without the hassle of exporting and importing DXF files. As DatumMate is working directly with your drawing database, transformation speeds are high; speeds of up to 30000 points per minute are easily achievable on a Pentium II computer. DatumMate even remembers features about your transformation and logs this data into the AutoCAD database, so that it remains with the drawing – no more not knowing if your drawing has already been transformed to the new South African Hartebeeshoek94 Datum!

DatumMate is very accurate in it’s transformation because it uses the 29000 trigonometrical beacons and the 20000 town survey marks when transforming data points. By working with 1 kilometre grid squares accuracy is ensured even across boundaries.

DatumMate enables you to import survey data from an ASCII data file and plot it directly in your drawing. The import of survey data handles the normal Cartesian survey system and the South African Lo survey system. You have the ability to have your survey points plotted with a description and also the ability to apply a filter to your data to selectively plot data points.

Once you have imported your data, you can prepare your data for possible processing with our digital terrain modelling software; a routine for automatically connecting ‘like’ data points for breaklines is even included!

DatumMate enables you to perform a single point transformation between the previous Cape Datum and the new Hartebeeshoek94 Datum (and vice-versa). In addition you can perform the same Datum transformation on a whole drawing (no need for DXF files). 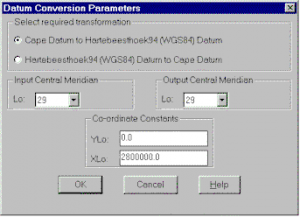 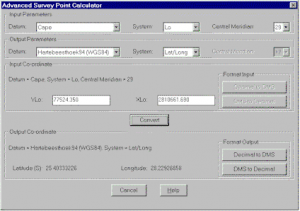 DatumMate also includes an advanced transformation calculator, whereby you can convert single point data from one survey system to another; for example, you can:

Once you have carried out your conversion on your drawing, you will want to draw an updated co-ordinate grid. DatumMate provides you with a facility to do just this with a grid generator that will draw a fully annotated survey grid in Lo format (or Cartesian); you even have a choice of grid style annotation!

DatumMate is able to carry out Datum transformations on the following AutoCAD objects:

DatumMate also includes drafting assistants, such as setting up your AutoCAD to correctly work in the South African Lo co-ordinate system.

DatumMate allows you to view any points’ co-ordinate in both the Cartesian system and the Lo system:

DatumMate has a full featured on-line help system, that explains how to transform your drawings in a matter of minutes!